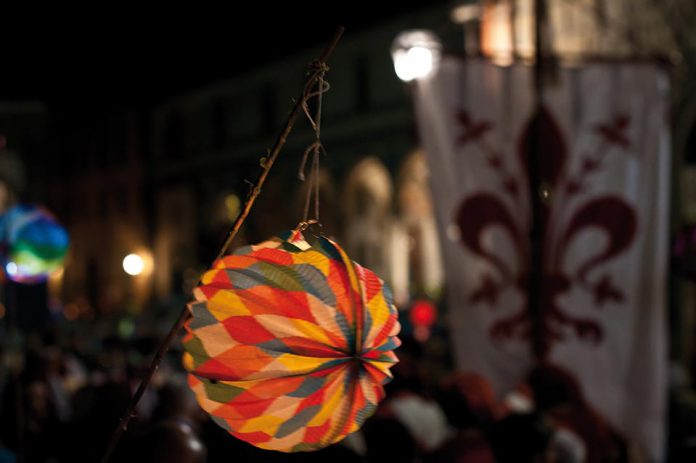 The Paper lantern Festival – Festa della Rificolona, takes place in Florence every year on the evening of September 7th as part of the celebrations for Saint Mary’s birthday. The origins of the festival date back to the 12th century when people from the vicinities came to Florence to celebrate Virgin Mary’s birthday and pray in the Basilica della Santissima Annunziata. Traditionally, the peasants brought the fruits of their labor as gifts to the mother of Jesus. Because they left their villages while it was still dark, they used handmade lanterns carried on long sticks to lighten the way with.
Florentines have preserved this beautiful, colorful scene for centuries through the procession of the lanterns from Santa Croce to Santissima Annunziata on the Festa della Rificolona.
The name of the festival comes from the young Florentines who would make fun of the peasants’ clothes and their strange walk when they reached the city. Women were especially mocked by Florentine children because of their rough and strangely shaped clothes. As soon as they entered the city the children would start singing “Ona, ona, ona ma che bella rificolona!”, a song that can still be heard today during the festival. The word rificolona is still commonly used as a form of criticism brought to women without any sense of style.
Nowadays, the lanterns have become beautiful paper-mâché objects for display. A week before the festival workshops are being organized, teaching children to make their own rificolona, encouraging them to enter the competition for the Graziano Grazzini Prize where the best handmade rificolona is selected. The awards ceremony and the traditional Rificolona blessing are held in Piazza SS Annunziata. Scents of popcorn and warm sugar float in the air and children together with adults make their way into the piazza displaying proudly their paper lanterns.
The celebration culminates in a “spontaneous” bonfire in the middle of the piazza where to the children’s delight, their colorful creations go up in flames. On September 8, families can participate at the annual Rificolona sull’Arno event where they can enjoy rides along the river Arno on lantern-lit boats.

Carnival has arrived earlier this year

January/February 2015: In this issue Florence is… – by Anna Balzani